We know that inflation is still high and that interest rates are still going up because our current overnight rates of 1 percent are too stimulating for our economy. Right now, our CPI continues to climb to 6.8 percent for April – the highest we’ve seen since 1981.

This is a long way from where the Bank of Canada would like us to be. Here’s the thing. Since 1991, the Bank of Canada made an agreement with our Federal government to keep inflation at 2 percent. The central bank believes that keeping rates between 2 to 3 percent, which they call the neutral rate, will be what it takes to keep inflation around 2 percent in the long run.

Now, here’s the plot twist. Last week, BoC came out say that they might not just look at inflation moving forward. Because Canadians have so much debt tied to real estate, what happens to real estate could affect where the Bank of Canada sets interest rates. This is a big change!

So in this video, let’s talk more about interest rates: where they are now, how high they might go, what this means for fixed and variable mortgages, and what we think about the Bank of Canada using real estate to steer interest rates.

Where Are Interest Rates Now? 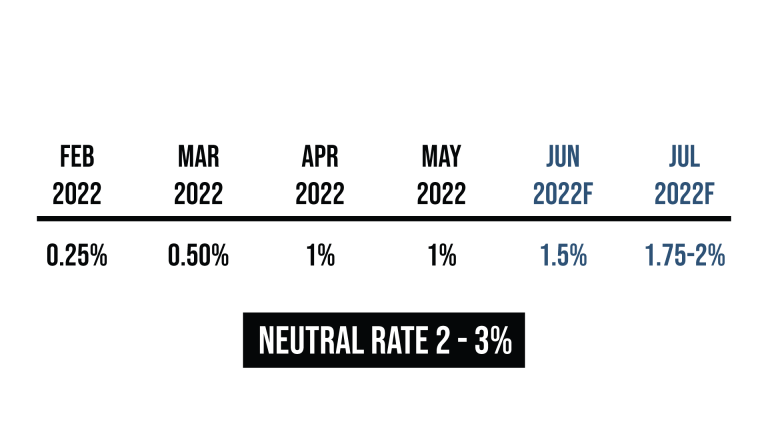 So, how high will interest rates go? Inflation is high. So naturally, people start comparing us now to what’s happened in the 70’s, which makes people nervous. If that’s the case, will overnight rates shoot up close to double digits again?

If you’re also worried about this, you can probably breathe a little easier now that the BoC has said “no” in a very clear way. Yes, it is possible that overnight rates will go above 3 percent for a while so that inflation can be brought back to the target level, but we won’t be at the same level as in the 1970s.

Tiff Macklem said at the end of April that they were looking at “a bit more than 2 or 3 percent, but not 7 or 8 percent.” The BoC has also compared how different we are from the 1970s, but that’s a different topic so I’ll probably make another video about that later.

Now comes the part about interest rates and real estate, which they also talked about last week. Even though the central bank is only supposed to watch inflation, they might end up looking at real estate to help them decide how to set interest rates in the future. They say that higher rates can cut down on the excess demand for real estate. If that works, we can expect a soft landing in the real estate market, and growth should start slow down and normalize.

But Canadians may have taken on too much debt, so they worry that if rates go up too quickly, it could cause a crash in the housing market, which does more harm than good. If that happens, they’ll have to stop raising interest rates.

To round out the argument, they also talk about the other side. If real estate prices stay high because demand is so strong, the central banks might have to raise interest rates above neutral rates to actually lower the demand.

What It Means For Fixed & Variable Mortgages

As of right now, it sounds like the Bank of Canada wants to raise rates as quickly as possible to get to our neutral range. Rates should stay between 2 percent and 3 percent in the long run, but in the short term, we might hit some speed bumps or beyond 3 percent.

So, let’s look at what the big banks think interest rates will be for the rest of this year and next. Keep in mind that right now, the market is expecting 1.75 to 2 percent by the middle of summer. Now, if you look at this chart, you’ll see that major banks have a wide range of expectations.

TD forecasts overnight rates to be 1.75 percent by the end of 2022, not even hitting the lower bound of the neutral rates. This also means that rates won’t change much after the summer. Most banks expect a small rate increase from summer to the end of the year, but Scotia thinks rates will go up more, with overnight rates ending the year at 2.5 percent.

For 2023, all of the big banks agree that rates will slow own, going up by only 25 to 50 basis points over the whole year. Scotia’s interest rate prediction remains the highest, at 3 percent, which is still in the neutral rate range.

We can also look at the yields on treasuries and bonds to find out what the market as a whole thinks. If you look at the yield on a one-year treasury and a five-year bond, you’ll see that the rates aren’t that different. In other words, most of the rate increases should happen in the next year based on market expectations.

If you’re trying to decide between variable and fixed rates, I’d say it’s still a coin flip, because where rates go depends not only on inflation but also on real estate. But as you can see, the bond market is pricing in pretty aggressive rate hikes right now, and that set the basis for fixed rates. This means that if overnight rates go up less than what the bond market has aggressively priced in, then variable rates will be cheaper.

You should also keep in mind that as a real estate investor, you may want more options when it comes to refinancing. If that’s the case, you’ll be better off with variable rates, which have lower penalties if you need to get out of your mortgage early.

I’ll end with a few final thoughts about the Bank of Canada’s new update on how changes in real estate could affect interest rate changes. We’ve already said that the BoC’s main job is to control inflation, so we don’t think it makes sense for them to use real estate to decide on interest rates.

If they stop rate hikes because of real estate, there are also other things that could happen. For example, if we pause but the  Fed in the US keeps raising rates, more money will flow to the US. This will take down our Canadian dollar, which will actually cause inflation to go up even more in Canada.

But a “soft landing” does mean that prices will probably go down. Right now, buyers have more power to negotiate than they have had in years. As prices go down, it’s possible for the market to overcorrect in the short term, so we think that now is the best time to buy real estate in Toronto.

If you’re looking to invest in real estate in Toronto soon, and you want to chat more about this, we’re ready for you! We can look at your requirements and preferences and then match you up with the best investment property that fits your needs. After we help you buy it, our team also provides renovations guidance, leasing and property management if you need it. Just connect with us if you want to learn more about our services.