This week’s rate hike is a big deal because it’s the bank of Canada rate hike week. Rates did go up the widely expected 25 basis points so now target rates are at 4.5% but more importantly we are looking for signs that rate hikes are ending. So in this video, I’ll summarize what went on and where things might be headed.

Latest Economic Data In Canada & The US

We’ve been seeing more signs that inflation is coming down. It’s more clear in the US with headline CPI falling at the fastest pace since 2020. And even though Core CPI is still going up, you can see that the price of core goods is coming down and price growth comes from core services which typically lags and is expected.

On the Canadian side, it’s honestly more mixed. Jobs numbers were the huge shock, coming in way higher than expected, but then CPI came in better than market expectations. And if we compare where the BoC thought we would be at year end from their October monetary policy report predictions, actual numbers came in might better too. The BoC expected CPI to be around 7.1%, but it actually came in at 6.7%.So from the central bank’s standpoint, inflation improvements are coming in better ahead of schedule.

In today’s announcement, the BoC touches on pretty much the same topics. They talk about how labour is still stronger than what they want it to be but the higher interest rates should slowly work its way through our systems and our economy should slow this year and next.

As expected, the BoC hiked rates by 25 bps to 4.50%. But more importantly, it looks pretty clear now that based on today’s information, they want to monitor how these rate hikes are working and they plan on holding rates at these levels for the next time. The caveat here is that it’s not 100% and they continue to emphasize that they need to take inflation back to 2%. 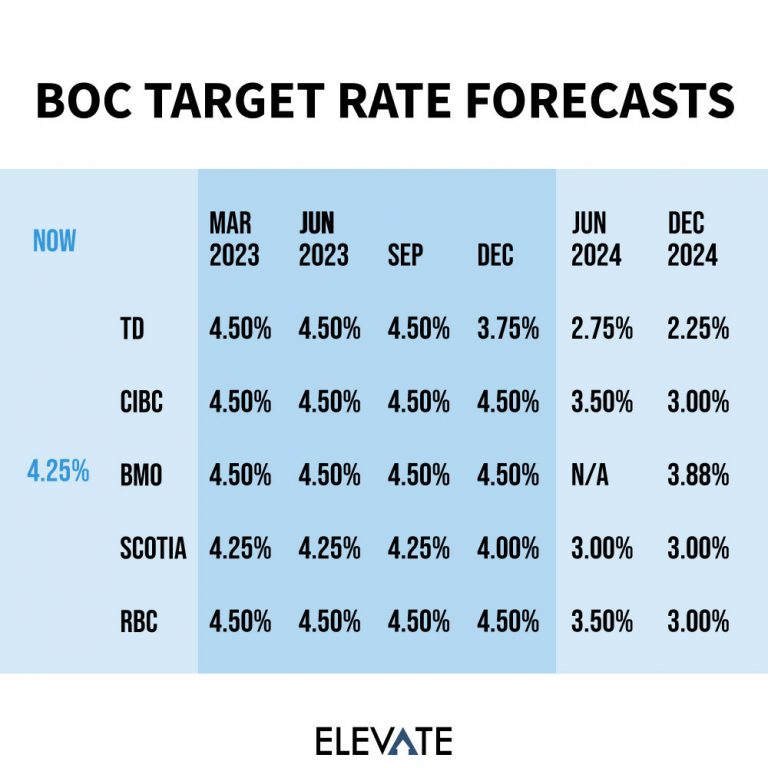 All of these signs are making it more and more likely that we are at the end of right hikes and that’s what all of our big banks think right now. If that’s the case, the next big question is now going to shift to when will rates start to fall?

Right now, TD and Scotia predict that it will be as early as Q4 of this year. But we think central banks are going to be a lot more cautious to prevent an inflation rebound, so a safer bet might be that rate drops will probably happen in 2024 instead. By mid-2024, the average view from the banks is that rates might come down around 100 basis points and it might come down another 50 basis points by end of 2024.

Honestly, the range of guesses for rates by year end 2024 is pretty big and that’s because two years in our very uncertain market is a very long time and a lot of things can happen between now and then.

But one thing that is more obvious is that the general consensus is that interest rates won’t be as low compared to what we’ve been used to for the past 10 years. Instead of seeing neutral rates between 2-3%, I think we’ll probably edge higher than that with the mid point closer to 3% instead.

Real Estate Activity Depends On Listings Coming Onto The Market

Having said that, the mentality of what is needed for us to tame inflation is certainly changing. BMO probably has been pretty bearish with their outlook, saying that we would need to see a huge spike in employment to get get inflation down. But now even they are softening their stance and saying that the soft landing we were hoping for might actually be more possible now.

It seems like the central bank also agrees here because they did up their GDP forecast for 2023 ever so slightly.

In the end, the biggest factor that will determine where real estate will go will still be dependant on interest rates. If we see a recession come soon so interest rates drop sooner, it’s probably viewed as more positive for our current real estate market since it will make things more affordable and cause a pick up in demand. But the more likely case is now currently that rates will hold more stable and if that happens, that will then end up causing more stagnant prices.

Right now, prices aren’t moving because buyers can’t buy but that’s because there’s not a lot of listings because sellers are holding back hoping for rates to come down sooner and prices to rebound. But once more people start to see that rates aren’t going anywhere anytime soon and prices aren’t going anywhere anytime soon, that’s when we should start to see more listings from those who need to sell come onto the market.

The fact that prices aren’t going anywhere soon also mean that the speculative demand that gained a lot of speed over the pandemic isn’t coming back anytime soon. There will still be investors that will buy under these current conditions but the focus will shift back to fundamentals: focusing on rental income and cash flows that make sense at these higher interest rates.

So what this means is that once more sellers start to sell, markets where prices aren’t affordable yet will need to see price get to more affordable levels for rental income numbers to work. And once they do, these rent yields or cap rates we call them have to hold still at these levels because we’re not expecting rents nor interest rates to move much this year.

The good news is that we don’t expect same prolonged slowdown that we saw in the 1990s with the big difference being immigration. Once our huge Canada immigration targets actually kick into effect, this increased need for housing combined will cause rents to come up again. And by that time, we should be closer to cooling interest rates well into 2024, and that’s when we might see Toronto real estate price momentum start to come back up.

The numbers actually work these days for freeholds with positive cash flow‘s and so we believe that we’re actually pretty close to the bottom already in the low rise market in Toronto. At the same time, you might feel that there’s no real rush to buy now given that conditions aren’t changing much for the rest of this year.

But here’s the other thing you need to know. Mortgage stress tests are getting harder probably by the second half of this year. Basically, you’ll end up getting the best picks on the market if you have a bigger budget to work with and more to choose from so it’s probably a better idea to take action sooner than later.