CPI data is taking centre stage these days because this is the single most important metric that the Bank of Canada looks at to figure out where they will take interest rates.

With the latest CPI readings sitting at close to 7%, there is fear that rates will have to get to 10 or even 20% just like the 70’s or 80’s to bring inflation back down. The thing is, they probably overdid it back then. The other thing that people might not know is that there was a completely different monetary policy then too, which means things might play out differently this time.

So, in this video, let’s go back in time to see if we can get better insights into what where interest rates actually need to be to bring inflation back to target.

Before I go into the history, let’s just quickly take a look to look at what’s been happening with inflation lately.

CPI actually started going above our upper bound target of 3% in April 2021. But at that time we were still in COVID, and the central banks thought that inflation was transitory, and so they kept rates at 0.25%. Inflation started ballooning, record low rates stimulated that more, and then the prolonged war in Ukraine and supply chain issues made things worse. It wasn’t until March 2022 when the central banks decided to start hiking rates. And honestly, it was too late. And so, inflation kept going up and up until it peaked in June at very high levels.

Since then, we’ve seen slightly positive slower CPI growth over the past 3 months which is positive. But once you break down the numbers, it is mainly due to oil prices coming down and the price of food and the price of services are still creeping up. We started jumbo rate hikes in July, and honestly I don’t think we’ve felt the full effects yet, and CPI and a lagging indicator too.

Basically, there’s no signs that inflation is being tamed yet, and so we’re probably going to see another jumbo rate hike on Wednesday. Now the big question is, how much do we need to go up until inflation can visibly come down? Everyone wants to see what happened last time, so let’s go there now and time for some story telling. 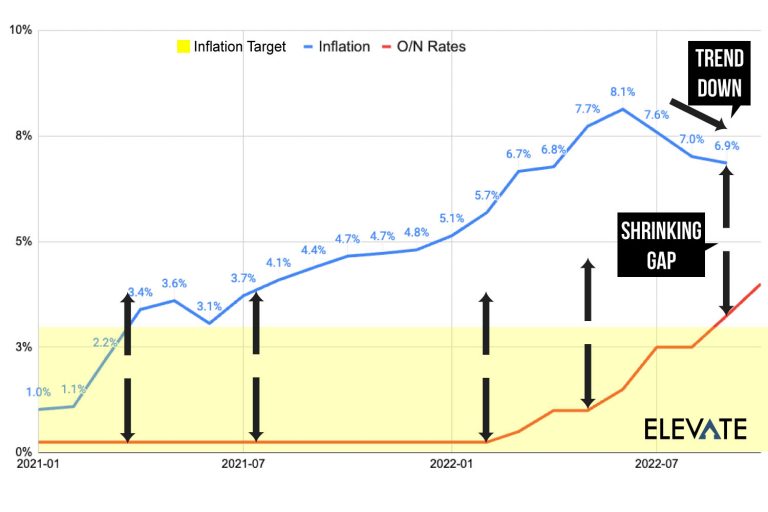 In the early 70’s, we were getting a lot more foreign money coming into Canada, which was pushing the loonie up. The Bank of Canada didn’t want that because it would be bad for exports, so they tried to keep our currency stable by not bumping interest rates drastically. Obviously, that didn’t work and we actually ended up going into stagflation: a period with high inflation, slow growth, and high unemployment.

So in 1975, the central bank tried another tactic by targeting our money reserve to keep that stable instead. They did mean jacking up interest rates but it really was by going the long route, looking at the money reserve signs to see how much to take rates up.

The by-product of rising rates was a 5 month recession from Dec 1974 to March 1975. That made the Bank of Canada scared and so they eased on rates too early, which made inflation rebound even higher. I think the method of looking at the reserve to figure out how much to increase rates just got really confusing, and eventually, they couldn’t figure out what was happening. And so, that targeting method got scrapped. 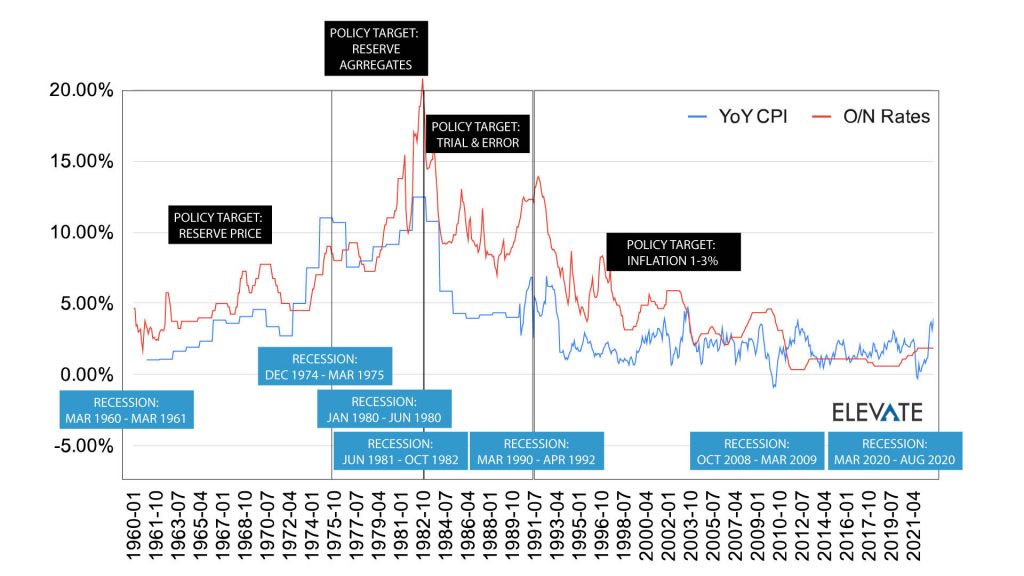 Starting 1981, Bank of Canada didn’t have any set targeting methods anymore. They also couldn’t really explain what they were doing, and a lot of times, they ended up just reacting to other countries.

For example, when the US increased interest rates, our loonie fell which spiked the price of imports and ended up giving us higher inflation. And Bank of Canada would have to raise rates an eventually took our overnight rates to over 20%.

Having no target isn’t good obviously, and even though we eventually brought inflation down, we also ended up going into three very long recessions within a short 10 year span from 1980 to 1990 and we definitely want to avoid that this time around.

The silver lining was that we come out with some hard lessons learned. In 1991, the Bank of Canada began to introduce a new mandate to keep inflation targets between 1 and 3%. It became clear that we should just monitor inflation directly instead of taking a detour by looking at other indicators.

Faster reaction times will prevent inflation from spiralling out of control. And this strategy has proven itself to work well for the past 30 years. In fact, the reason inflation is so high today is because we did not react fast enough when CPI went above 3%. 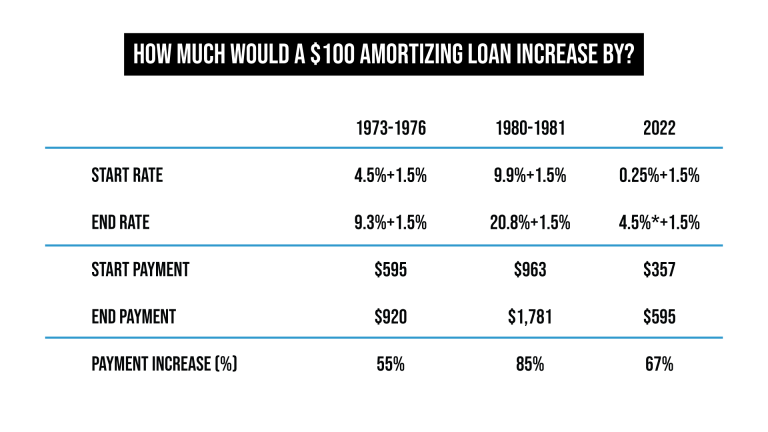 CPI first went above 3% in April 2021. But the central banks thought it was transitory and we let it spiral higher for another year before raising rates. That’s why we are close to a 7% CPI reading a year and a half later. Rate hikes were probably too slow even in the beginning because inflation was spiralling up quickly.

Macklem has gotten a lot tougher with jumbo rate hikes since then, which we really actually need. I would say the big difference between the 70s and 80s and today is that we know what to target, which drastically improves our reaction time.

In 1972, overnight rates went from 4.5% to 9.25% within a span of 3 years in order to tame inflation. From a monthly payment standpoint from typical mortgages and business loans, that’s a 55% increase over 3 years. I think the big mistake that led to the second round of inflation rebound wasn’t that they didn’t raise rates enough then, but rather that they let loose too early and lowered rates again too quickly because the recession hit.

That’s what resulted in the second round of even higher inflation, and the Bank of Canada took rates from 9.9% to 20.8% within one year. That almost doubled the monthly payments, and set up in a series of three long recessions, which probably overdid it.

Now, let’s look at what’s happened so far this time. Our rates went from 0.25% to an expected 4% by Wednesday within 6 months which is a much quicker pace. We expect rates to peak around 4.5%, and when that happens, the impact is equivalent to close to a 67% increase in monthly payments.

What This Means For Real Estate Investors

Nobody knows for sure whether it’s actually working, but it’s positive to see inflation not spiralling up as quickly anymore. We’ve added three more rounds of very aggressive rate hikes since July, so they still need to be worked into the system, and remember, CPI is a lagging indicator too.

Given that we are more leveraged today, we’re probably getting close to where we should be in terms of interest rates and we just haven’t felt the full impacts yet. At the same time, the Bank of Canada will probably play it safe and keep rates steady to prevent an inflation rebound like what happened in the late 70’s. So interest rates might not be going up much more after this but also, don’t expect it to come down son either.

If you’re looking to invest in real estate, you’ll want to run numbers using our current high interest rates to be safe. You might have heard me say it before, it’s not a bad time to invest in real estate as long as the numbers work. If you can get a deal with a great price to get positive cash flows at today’s higher, say 5 year fixed rates, you’ve got good holding power and that’s what we look for in a strong real estate investment.

When you’re looking to get started with real estate investing and need help with this, our team is here for you. We’re a real estate sales brokerage that focuses on investing in real estate in Toronto, and we’re happy to help you learn more about these opportunities.

When you work with us, we take the time to understand your needs, teach you the ropes, show you these deals, and eventually help you buy the best one for you. But that’s not all. Our team also provides renovation guidance, leasing and property management if you need it. Just connect with us if you want to learn more about our services!