Price Down, Rents Up: Does It Make More Sense To House Hack With Toronto Real Estate Now In 2022?

House hacking seems to be making a comeback now that rents are going up quickly and home prices are coming down. In case you don’t know, “house hacking” is a fancy term for buying a house, living in part of it, and renting the rest of it out to help pay for expenses and your mortgage. So, we’ll try to clear things up and take a closer look at what house hacking numbers look like in Toronto nowadays.

In an ideal situation, the best house hacks allow you to “live for free” because your tenants pay all of your bills and your mortgage. But home prices in Toronto have been going up much faster than rents in the past few years. So even though you’re still negative cash flowing, the amount will be a lot less compared to if you were renting and you’re actually gaining equity with the money you put in each month instead of going down the drain.

Let’s take a look at the numbers. Instead of paying $1,600 per month to rent a basement apartment, you might be able to live in the same unit for a lot less if you could buy a house for around $1 million. If you put a 20% downpayment at our current 5 year fixed interest rate of 5.25%, then you can collect over $4,600 in rent, which helps pay for your operating expenses on the house and the mortgage, and you’d only be out $600 per month instead of $1,600.

And remember that $4,400 per month that you’re paying the bank each month? A big portion is actually principal paydown, so that’s yours to keep at the end, so you’re actually in a much better position compared to renting even before we take into account appreciation.

House hacking looks great, but, of course, the biggest hurdle would be being able to actually buy one in the first place.

House prices in Toronto have dropped around 20% on average as of the July sales data, but prices are still pretty high. A $1 million house means you need around $235,000 of capital with a 20% downpayment and closing costs, and it might be even more if you need to renovate the place before you move in.

The other big hurdle is being able to qualify for an $800,000 mortgage, and that means you’ll need to have a six-digit family income to qualify. 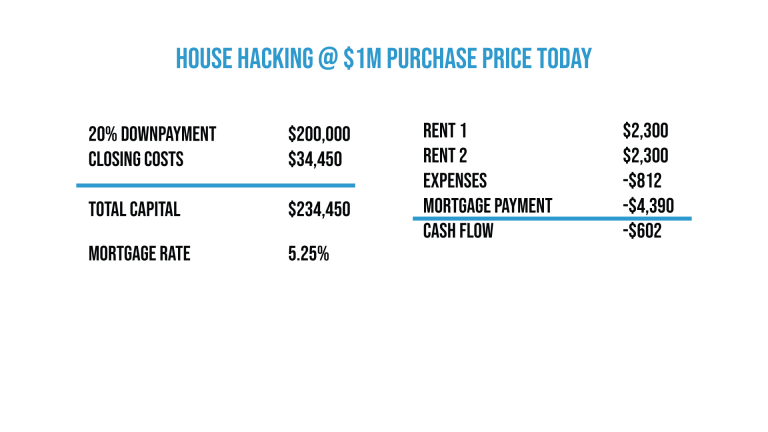 House Hacking: Before vs. Now vs. Later

If you make it past the two financing hurdles, let’s take a deeper look to see how things actually compare now versus before. The numbers are actually moving in your favour: rents are up and prices are down.

A more accurate way to compare now and before isn’t to look at absolute rents because prices have changed, but rather rent yields. And you can see that rent yields have gotten 63% better!

But I know what you’re thinking: interest rates have also gone up. Even though variable rates aren’t at 1.75% anymore, at our current 5.25% variable rates, cash flows are actually still better. 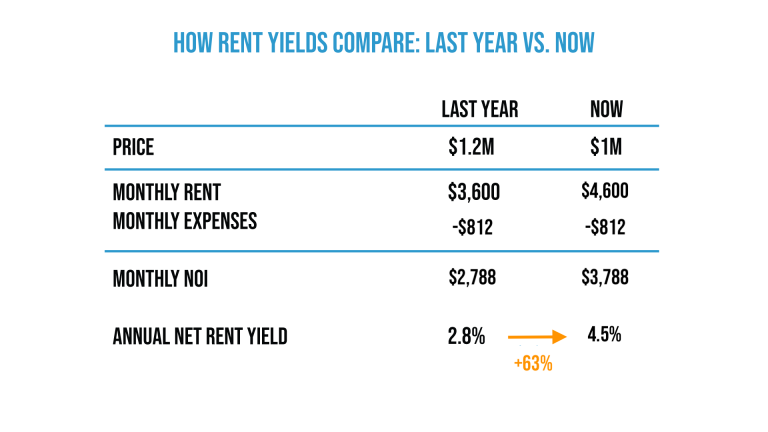 I think the big thing that can make a lot of sense is if you have cash, so that you can take advantage of the big price drops and the rising rent yields more effectively, at least in the short term.

If you have $330,000 of cash now, you can put down a 30% downpayment and you end up with break even cash flow, which means you can really live for free by house hacking. As a comparison, $330,000 was just a 24% downpayment last year, and so you’d be cash flowing negative if you did the same thing last year.

I haven’t talked much about market appreciation in this video, because I assume that things will average out and you’d probably see similar rates of average appreciation in the long run. But keep in mind, this is a huge part of why real estate makes sense.

At an average appreciation rate of 7% per year, which is what we’ve been in the past 50 years in Toronto, that can bring in $70,000 per year on average for a $1M house, so that’s something else to keep in mind to sweeten the decision.

Perhaps to wrap things up, remember that a good deal compared to the average market will always be a good deal, whereas interest rates are cyclical and higher interest rates won’t last forever. What this means is that buying now means you can take advantage of a lower purchase price and better rental yields, and you can always refinance when rates get better.

So if you are interested in learning more about house hacking in Toronto, let’s chat! We can take a look at your budget and requirements and then show you what might be possible in our current market and what it takes to get there.

Once you’re ready to buy, our sales team will help you buy it, offer renovation guidance, and help with leasing or property management if you need it. So just connect with us if you want to learn more about our services!