This week, a report came out from a leading brokerage in Canada gives a summary of change in price in 2022 and gives their predictions for 2023 for different regions in Canada.

Of course, I went right to GTA to see what they think and it seems extremely off. Now the media is all of it lately and so I wanted to clarify things so you can actually get a better picture of what’s happening.

In this report, they’re saying interest rates have risen a lot this year and it probably will go up a bit more in 2023. That’s going to impact our GDP and increase our chances of a recession.

You probably know this too, and I agree with them. Because interest rates are still high, that’s going to limit the price growth on real estate. Yup, if rates don’t come down plus we see a recession, that’s definitely going to put more pressure on real estate prices.

Let’s hop over to the CREA MLS home price index for Canada. In Canada, we’ve come down 15% from the peak but chances are, the prices at the peak was over extended. If you compare the current October prices to the 2021 average, we’re still 4% above that and just 1% lower than the October 2021 prices.

Assuming we’re talking about end user homes, fixed rates went from 2.5% to 5.5%. So this means prices have to drop 30% from before for a new purchase to be just as affordable for new buyers. 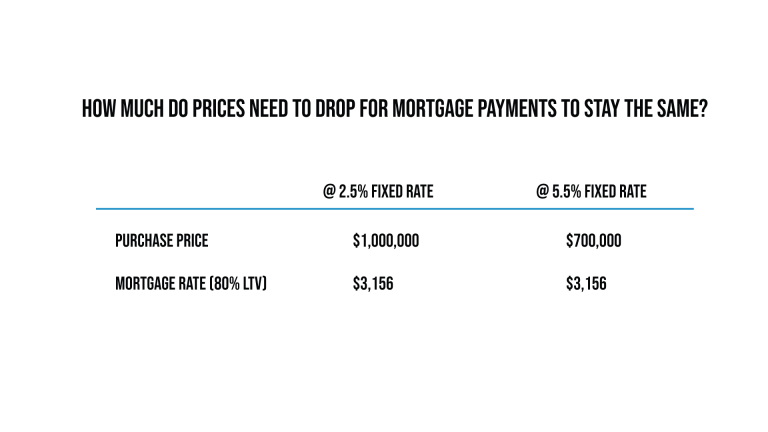 This report is predicting a modest 3.3% price drop in 2023 for Canada which means they think prices will stabilize from here on, so a lot more comforting compared to what’s happened this year.

But unfortunately, based on affordability alone, I would have to disagree with them on this and say Canada as a whole probably has a lot more room to come down in 2023. 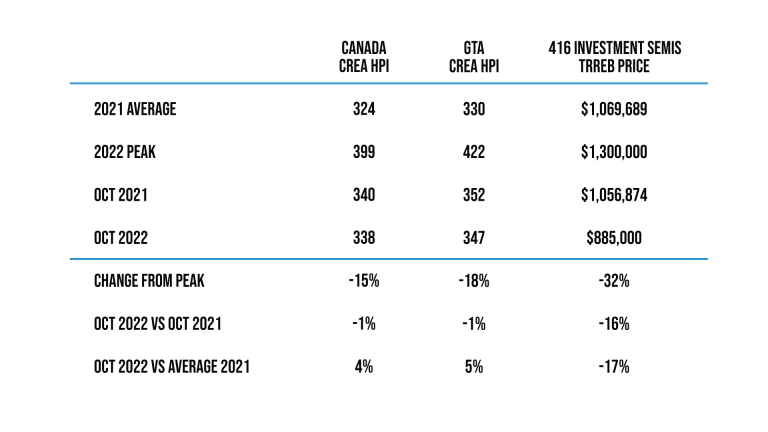 You’re probably watching this video because you’re based on Toronto so let’s zoom into their numbers for the GTA from CREA. We’re down 18% from the peak, but again, still up 5% compared to 2021 prices here and also only 1% lower than October 2021 prices. The situation in the GTA is actually pretty similar to Canada as whole so far.

Let’s take look at the outlook report again. Right off the bat, the numbers are extremely off. They’re saying that GTA home prices average around $550,000 in 2022, which is impossible! That’s also a 50% drop from 2021, which is crazy. Their math is also off here because they calculated this as a 11% increase.

Let’s see what the real prices are at right now. From TRREB as of October of 2022, the average price for the GTA is at $1.09 million dollars.

There’s so many things wrong with this report right now that I’m concerned about its credibility. But to be thorough, we can see what they think about 2023 for the GTA. What they’re saying is that we’ll see much bigger declines in the GTA compared to Canada s a whole, with GTA prices coming down a much bigger 12% next year.

Given the affordability situation, there is room for double digit price drops still in 2023 for the GTA as a whole, and this will be primary in the starter end user homes where home owners are more stretched and more leveraged. The part that we disagree on is that we don’t think the GTA would see the biggest declines in Canada, because affordability is based on interest rates and that’s across the country. And if we’re in a recession, I would expect Toronto’s more diverse economy to be more stable compared to markets that are more dependant on single economies.

Now, we’re an investment real estate brokerage in Toronto and our clients mainly buy starter 2 unit houses to invest in, so I had to dig deeper here into our investment pockets because another double digit drop prediction in 2023 is scary for investors.

The clear difference with rental properties is that rents have been rising and that’s helping to counter the effects of rising interest rates. If you look at this chart, you can see that prices also need to come down because of rate hikes, but it doesn’t have to be as much at 17% for Toronto’s rental properties. 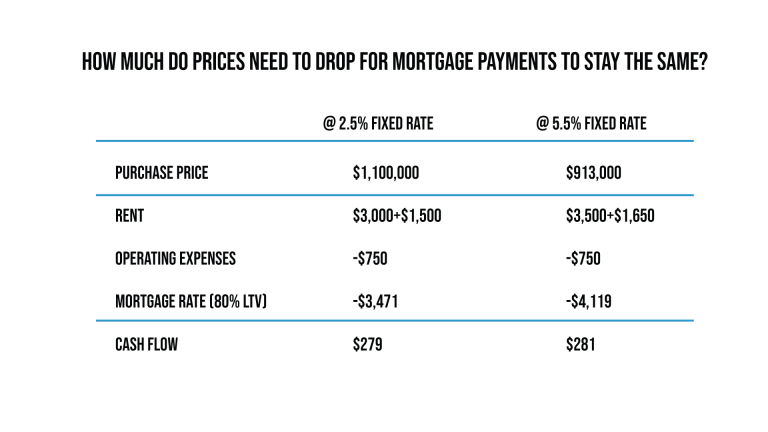 Recent trends have also showed big differences compared to Canada and the GTA as a whole. Generally, investors are much quicker to react to interest rate movements, and so prices have already come down 32% from the peak. On a year over year basis, homes are down 16% from October of 2021, and down 17% from the 2021 average.

So, we’re actually pretty much in the affordable range now and from our standpoint, we think that these prices are pretty likely to stabilize from this point on.

I’ve always known to take forecast with a grain of salt, especially in this more uncertain market that we’re in. This report predicted a 10% price gain for Toronto in 2022 and obviously that didn’t happen but even historical data could be really off.  So, always fact check even with credible sources and dig into the data if you can, so that you don’t get misinformed.

After digging into the data, I would say that overall, GTA home prices have been dropping at a similar rate compared to Canada, which is good to know. But it’s also clear from our research that investment properties respond to interest rate movements faster than the overall market, and don’t need to drop as much because rents are there to help counter some of the interest rate hike effects.

When you work with our team, you can definitely bounce news and ideas with us and we love to talk Toronto real estate investing anytime.

We’re a real estate sales brokerage that focuses on investing in houses and multi family homes in Toronto. When you work with us, we take the time to understand your needs, teach you the ropes, show you these deals, crunch all the numbers, and eventually help you buy the best one for you.

But that’s not all. Our team also provides renovation guidance, leasing, and property management if you need it. So, just connect with us if you want to learn more about our services.