With condo prices still lower year on year, are condos actually a better investment compared to other asset classes that have already seen massive gains? In this video, I’ll talk about what caused Toronto condos to go in different directions in the past year, and where Toronto condos might head moving forward. If you watch till the end, I’ll let you know what I think if you’re thinking about entering the condo market today.

Toronto Condo Investment Returns Leading Up To the Pandemic

Here is a quick recap of what’s been happening in the condo market. Condo prices have seen amazing double digit appreciation for almost five years leading up to the pandemic.

On the cash flow front, condos have never been that great primarily because of condo fees. But having no cash flows wasn’t a big issue with condo investors because they’ve been winning simply because of impressive appreciation.

For those who wanted better cash flows, there was another option – Airbnbs. Yes, condo rents don’t necessarily cash flow positive if you rented them out as long term rentals, but if you make them short term rentals, then you can easily cash flow even better than freeholds. So if you were an Airbnb condo investor, you were doing crazy well from both the cash flow and appreciation standpoints leading to the pandemic. 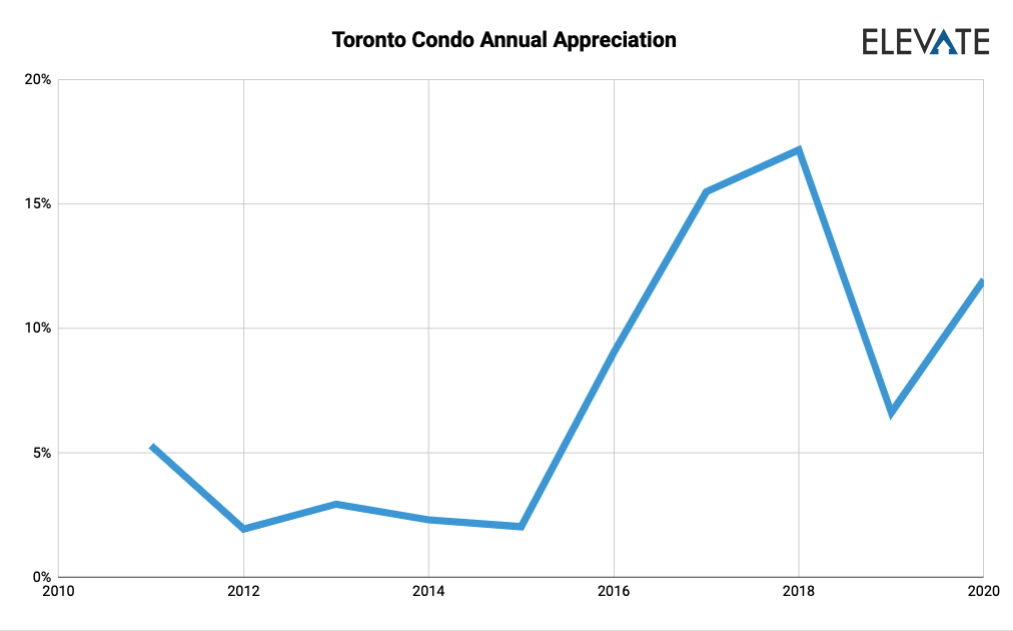 But as you know, Toronto is in a housing crisis, and the city doesn’t like the fact that you’re taking units that can be lived in and turning them into Airbnbs. And because of this, the city put an end to short term rentals and finally started cracking down on them last year.

Basically, Toronto landlords aren’t allowed to run short term rentals on properties that are not their principal residence. And so … if you were an airbnb investor, all of a sudden your cash flows took a huge drop because you how to downgrade to long term rent yields.

On top of this, long term rents have also dropped and you faced higher rent vacancies as well because less people needed to rent downtown from both workers and university students, plus immigration was put to a halt.

So instead of generating possibly +$500 in positive cash flows on your Airbnb condo, you might be hit with -$350 instead, which is a huge $850 difference and this definitely affects your holding power.

If you watched my last video, you’ll know that cash flows are important primarily for holding power but the majority of your returns actually come from appreciation.

So if you had a long term rental before COVID instead of an Airbnb, lower rents and higher vacancies doesn’t actually made a massive impact to your bottom line… if appreciation remains more or less the same. But this is a totally different story if your assumptions in appreciation have changed.

You’ve seen it already, there’s been a lot more supply in Toronto condos because investors aren’t able to hang onto their negative cash flowing investments and less people will need to live in condos because they can work from home permanently, so perhaps demand for condos and hence appreciation might never be as high again.

So if you were assuming high appreciation rates of 10 percent per year before, but now you’ve downgraded to 3-5 percent per year, then this will be a game changer in terms of your ROI projections.

How Do Cash Flows Compare?

If you’re comparing it to how much an Airbnb investor was making in the past few years, it’s definitely no. Condo prices have dropped but you’re looking at much lower rents, so even with lower rates, your rent yields are definitely still lower.

However, If you’re comparing your yields and cash flows now to long term rent yields before the pandemic, they are pretty close because even though rents have dropped, interest rates have dropped a lot too so that balances out with the current drop in condo prices.

But as you’ve seen during the pandemic, condo cash flows are flat at best, which means during a downturn, you’ll need more realistic expectations and set aside cash to chip in to cover operating costs when things get shaky.

How Does Appreciation Compare?

It’s possible that you can benefit from a one time higher appreciation with condos because it’s trailing behind the freeholds and that means you would have better overall ROI. But that would be speculating which I don’t really like to do.

To help you form a better picture for future appreciation rates, let’s go back to the fundamentals. From the supply side, there’s limited space in Toronto so we can’t expand like the suburbs. From the demand side, Toronto attracts a net influx of people, and demand will only increase when immigration and migration picks up again because people are drawn to be where the action is.

So just from supply and demand, this points Toronto prices up in the long run. On top of this, Toronto gets the most attention from public and private sectors. This means economic recovery typically starts in the core. All of these factors help support the fact that Toronto condos are a stable long term investment with good long term growth potential.

Other Benefits Of Investing In Toronto Condos

Another big benefit for condo investors is that they attract the best tenant pool and many renters are transient – they like to move around. This means you have lower tenant risk, you’re less restricted by rent controls, and you can more easily adjust rents upwards when rents recover.

Having said all of this, condos still can generate around 20 percent ROI a year if you assume 3 percent annual appreciation.

It’s true that houses can generate better ROI because they can cash flow positive, but 20 percent ROI with condos is still really good if you can’t afford a house.

How We Can Help!

If you need help figuring out what’s right for you, just reach out to us. We’d be happy to help you navigate the Toronto real estate investing front and match you with an investment property that fits your requirements and preferences.