Variable Rates Might Go Higher Than Fixed After The Next Bank Of Canada Rate Hike!

The last Bank of Canada rate hike in September increased a lot of variable mortgage payments because the trigger rate hit. And next week’s rate hike might have something just as big because it looks like variable rates might actually go higher than fixed rates!

So in this video, let’s look into what’s going on and more importantly, what this means for you as a real estate investor.

Variable mortgage rates are usually lower than fixed rates at the time you start your mortgage. And historically, your cost of borrowing with a variable mortgage is also less than than a fixed rate mortgage over your borrowing term, and the reason for this is kind of like insurance. Fixed rates give you more certainty and so you end up paying a bit of a premium on it.

Now we all know interest rates have been going up quickly, and fixed rates have been leading the increases since the end of last year, even before Bank of Canada started increasing rates. The reason for this is because fixed rates are based off of the bond market, and simply speaking, the market tries to figure out where rates are going to go in the next 5 years and takes an average of that.

With inflation is still looking strong, and there was a collapse in the UK pound which surged UK’s borrowing costs, and then our bond yields also went up with it but it looks like it’s settling down again. This is why 5 year fixed rates also edged up last week. But even after that, the spread between 5 year fixed and 5 year variable rates is very close with only a 30 basis point difference between the two.

What this means is that the variable rates, which move with the Bank of Canada’s rate hikes, are going to go up between 50 and 75 basis points next week. And that’s going to take variable rates higher than fixed rates!

This is a huge turning point in a good way in our opinion. The only times when variable rates are higher than fixed rates are usually because rates are expected to come down and it’s probably peaking. 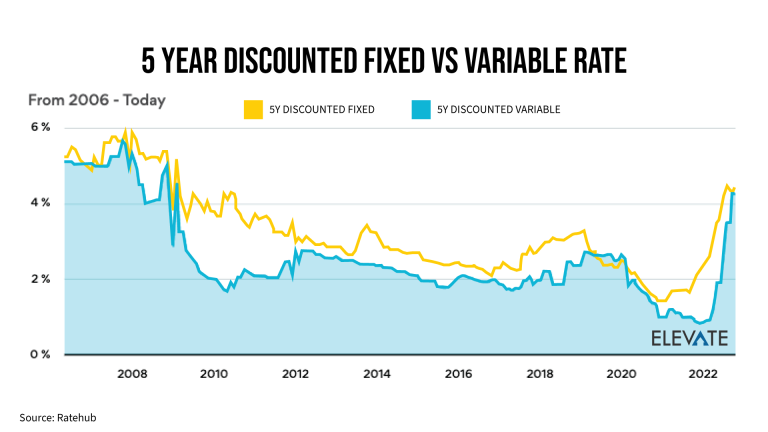 Should You Go With Fixed Or Variable Mortgages

There are a couple of takeaways from all of this. If your first question is, what type of mortgage should you go with, then I’d point you to my other video that talks about that, and it really still applies.

Past performance doesn’t imply future results, and the bond market might not be right either, but there is a good chance that you’d be better off with variable if you believe that rates are actually peaking.

Of course, the uncertainty is still there and it looks like a good balance of risk and reward might be to go with a shorter one or two year fixed rate.

But more importantly, I’d say the interest rate risk that real estate investors have feared for the past year is coming down and this is really a key factor that’s putting investors on the sidelines.

The truth is, higher interest rates don’t mean real estate investing doesn’t make sense. You just need to get it for the right price as that the numbers work. As long as you can get good positive cash flow, it’s still fundamentally a strong investment.

And it’s actually better than normal because you’ve gotten major price discounts in order to get the numbers work on higher interest rates. Once your borrowing rates come down, your cash flows will look better. And when property values recover, the cherry on top is that you’ll see better appreciation because of your deep discounts.

As we see more and more signs that rates are levelling off, investor demand is going to come back and so we expect a quicker bottoming out in the investment property market in Toronto. So this really is the best time to start seeing what you can get, before everyone is back on the bandwagon.

And if you’re looking to get started and need help with this, our team is here for you. We’re a real estate sales brokerage that focuses on investing in real estate in Toronto. When you work with us, we take the time to understand your needs, teach you the ropes, show you these deals, and eventually help you buy the best one for you.

But that’s not all. Our team also provides renovation guidance, leasing and property management if you need it. So, just connect with us if you want to learn more about our services!