Now here’s finally some good news. We’re seeing more certainty from all angles recently, and this ultimately is bringing more confidence back to real estate.

So in this video, let’s dive in and see what’s happening.

It looks like all those rate hikes are starting to kick in. It started last week with the US CPI coming in lower than expected. Headline CPI was at 7.7%, down from 8.2% in September, and lower than what was expected at 8%. Core CPI, which excludes more volatile food and energy, came in at 6.3%, lower than September’s 6.6%, and lower than the expected 6.5%. Then earlier this week, US PPI, the producer price index, also came in lower, really reinforcing the same themes.

Now, Morgan Stanley just released an updated economic outlook and dares to say that the US CPI will get to under 2% by the end of 2023. They’re expecting demand to be weaker, that we’ll start to see more supply chain improvements, and shelter, food, and energy prices will start to stabilize. And all of these things will lower inflation, which does give our central banks room to slow down rate hikes. In fact, they think the Fed will stop raising rates once they reach 4.625% in January (they are currently at 4%).

Now let’s look at our side of the border in Canada. Fresh off the press, we have our Canada CPI released, also coming in as expected. Core CPI is what BoC is monitoring closely now, and that’s finally coming down a bit. Energy, clothing, and shelter costs are still rising quickly, but food prices are falling. And since most people expect shelter and energy to moderate into next year, these are actually signs that rate hikes are starting to kick into effect. 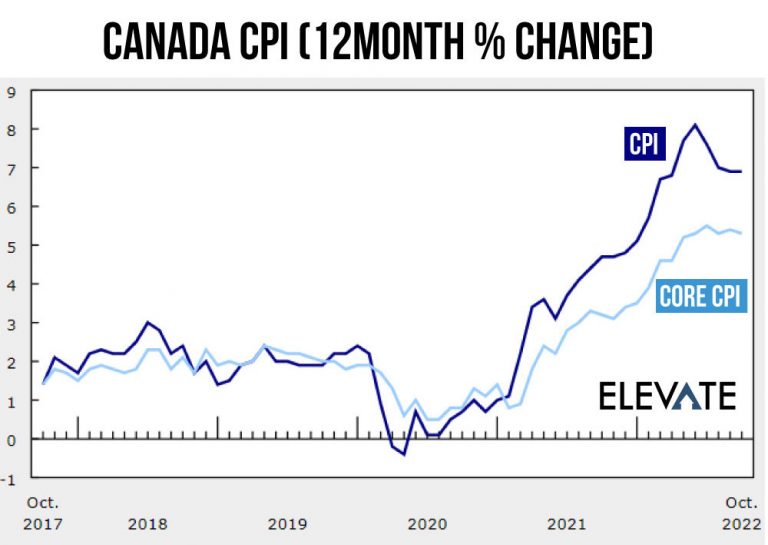 We know the BoC certainly thinks so, since they lowered inflation projections in the last Monetary Policy Report. And all of these things are causing bond traders to shift their interest rate expectations lower too. 5 year bond yields were at 3.8% just last week but have since fallen to near 3.3% – a 50 basis point drop in days!

And interest rate expectations are finally also converging. The banks all had different options in terms of how high interest rates would go just a few months ago, and it was also different from what the bond traders were expecting. Now everything seems to be aligning much better. Right now, the bond market expects us to peak around 4.25% by the first half of 2023, and the big banks have a similar idea too.

Don’t get me wrong. I’m not saying we’re done rate hikes yet, but the expectations are certainly getting a better consensus. Right now in Canada, our policy rate is at 3.75%, and we might see another 25 to 50 basis points in early December. At that point, we would be at 4 to 4.25%, which is close to where the current projected peak should be. 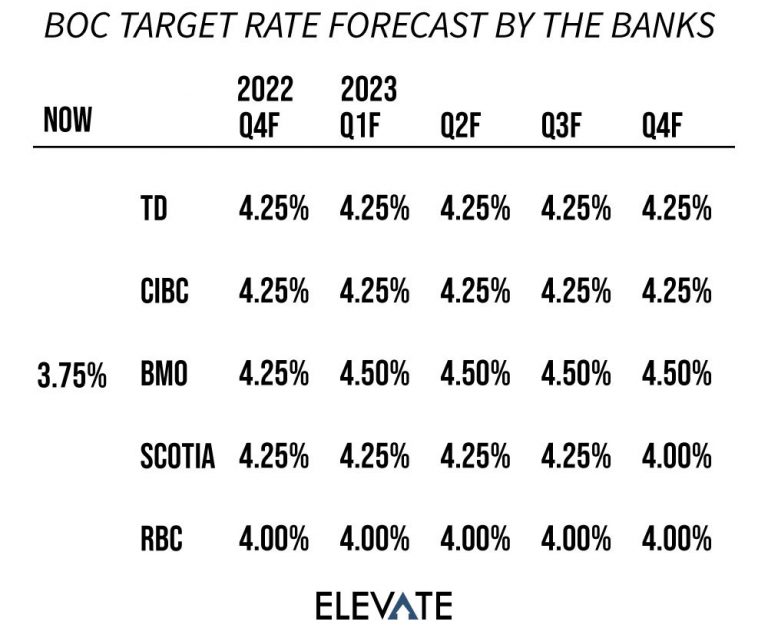 The end result is that things should continue to stabilize for Toronto real estate. Sales have been stable for four months now, and new listings are also stabilizing, so these forces holding strong are not giving much room for prices to budge since July. 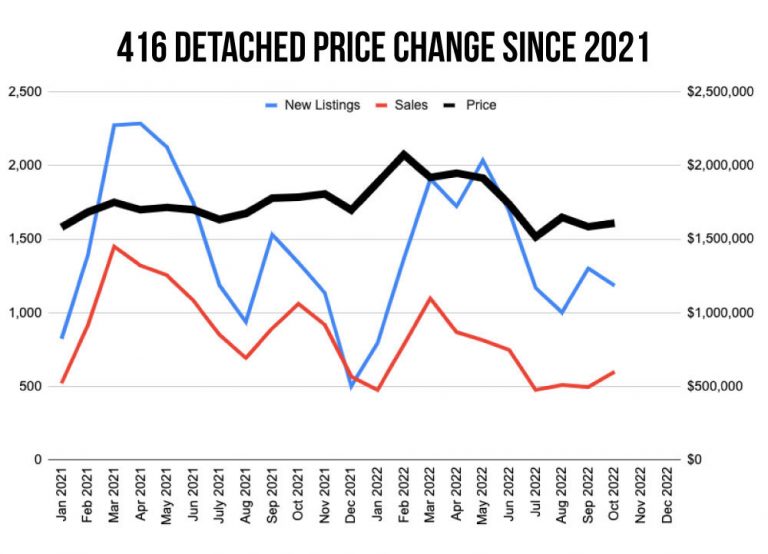 If you ask anyone to guess what a property might sell for, it was really a coin toss because expectations were all over the place. But I’m happy to announce that prices have become much more predictable in recent weeks. But also because rates aren’t coming down anytime soon, we don’t expect prices to come up that quickly because the market can qualify for 25% less as a whole in this higher interest rate environment.

However, stabilising conditions will bring buying confidence back, and there will be more buying action and faster recovery in certain submarkets. Here’s what we expect.

Next, higher interest rates will mean a continued investor preference for multifamily homes that do cash flow at 5.5% interest rates. This also means condos that cash flow very negative have much weaker holding power and the combination of more listings coming up and less investors buying probably won’t do as well.

Finally, there will be a preference for markets with higher growth potential, and that’s when you need to keep an eye on government housing policy. With the Ford government investing more in developing low-rise neighbourhoods with more density and better transit systems in place, we expect houses in Toronto to continue to outperform the overall market.

As we head into the holiday season, we expect real estate activity to slow down, and that’s going to cause a seasonal slowdown even though things are picking up. But what this means is that if a good opportunity pops up, you might see less competition and end up snatching a deal. So if you’re ready now and want to see what deals are out there, just reach out to our team.

We’re a real estate sales brokerage that focuses on investing in houses and multifamily homes in Toronto. When you work with us, we take the time to understand your needs, teach you the ropes, show you these deals, crunch all the numbers, and eventually help you buy the best one for you. But that’s not all. Our team also provides renovation guidance, leasing, and property management if you need it. So, just connect with us if you want to learn more about our services!