How Will A Growing Toronto Renter Population Affect The Toronto Real Estate Market?

When things become too expensive to buy, our rental population in Toronto start to grow. Let’s explore how this will impact Toronto real estate when it happens!

It’s a known fact that our population is increasing in Toronto. We were the fastest growing city in North America in 2019, driven by immigration. Even when immigration took a pause in Canada because of COVID, we’re still in second place just behind Phoenix for 2020. But unlike the other growing cities on the list, we’re the only ones with limited land in Toronto so the only real way we’ve been meet the growing housing demand is to build up and this is why we also take the prize for the most cranes in North America.

Now we know that after COVID happened, people have been wanting more space so there’s a greater preference for houses instead of being cooped up in smaller condos. But that’s not all, we’re also seeing a few other things that are quietly dwindling our housing supply on the other side. First, instead of buying one home and swapping for another, more people are owning more than one property in the form of either rental properties or second homes.

Second, older residents who normally sell their homes, typically houses, and downsize or move to senior homes have been hanging onto their properties too. So as our population grows, combined with a bigger preference for houses, combined with limited land to build houses, combined with less people selling houses – these are all signs that the price of houses instead of condos in Toronto might go up more and more quickly in the future.

Unfortunately, income growth isn’t catching up to real estate prices. So, we also expect a growing percentage of renters in our Toronto population as well. In this video, we’re going to hypothetically play out how things look like if our renter percentage in Toronto start to grow. 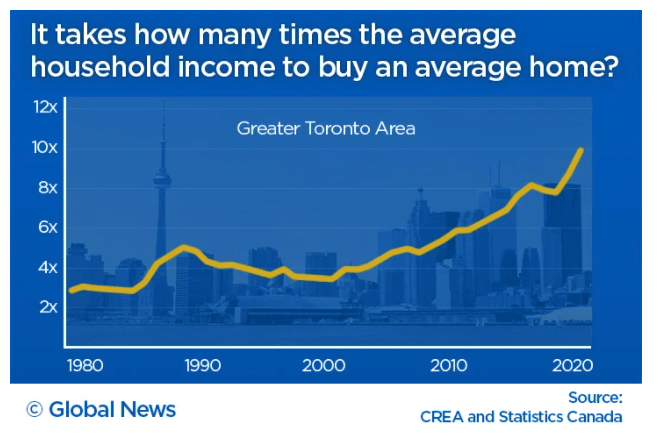 Let’s take a look at our current mix of renters to homeowners in Toronto. According to our latest census, 46% of our Toronto population are renters. Now if you compare this to other cities in North America, San Francisco is 20% more dense than Toronto and because of this, they have a bigger renter population at 65%. New York is even more dense and their renters make up 67.4% of their population. So it looks like there is a correlation between the density of a city and the percentage of renters and a report by Insurify verified our hypothesis.

Now when our renter population starts to grow, studies also show that the types of renters will also start to change. Specifically, we’re going to see more renters who are richer, older, and have bigger households. And as our renters evolve, we’re also probably going to see changing renter preferences too. Older and richer renters will want nicer and bigger units because they can afford it. A growing family size will mean that there will be continued preference for houses over condos. At the end of the day, increasing condo supply to meet renter demand might not be the only solution to meet the entire rental demand anymore.

A big part of our rental market right now is filled with smaller 1 or 2 bedroom condos, then we have fewer larger condos up for rent and also a smaller number of bigger houses up for rent when you compare this to the condo rental supply.

How Will Increasing Renters Affect The Toronto Real Estate Market?

Right now, it’s not accurate to just use rent yields to estimate the cost of a property because you’re also competing with end user buyers who don’t look at that when bidding for houses.

Of course, when there’s a permanent shift in demand, the real solution in the long run is to bring up supply quicker to match the growing demand. If we’re expecting more preference for houses, we can probably expect more laneway houses or garden suites popping up to meet the growing demand.

And following the same frame of thought as before where rent yields will be the predominate influencer for property prices, we’re also likely going to see a bigger bump in property prices from properties that have a second house. So if you build a second house and your net rent yields go up by 50%, then it’s very possible that land with two houses might be 50% more than the same lot with just one house.

Right now, houses have much better rent yields compared to condos. You’re looking at positive cash flows for houses in Toronto, compared to negative cash flows for Toronto condos. And if you believe that houses will also see the best rent growth when our renter population continues to grow, then it’s very possible that we’ll also see the best long term appreciation in houses as well. We’re big believers in investing in freehold houses in Toronto and if you want to chat more about this, we’re ready for you.

We can look at your requirements and preferences and then match you up with the best investment property that fits your needs. After we help you buy it, our team also provides renovations guidance, leasing and property management if you need it. Just connect with us if you want to learn more about our services!